Atlanta is the culinary epicenter of the South. Yes, we know that’s a bold statement, but it doesn’t make it any less true. Especially when you have James Beard Award-nominated chefs like Kevin Gillespie, whose unique dim-sum style restaurant Gunshow is still one of the hardest reservations to get in town, and Ryan Smith of Staplehouse bringing thoughtful and groundbreaking cuisine for a good cause, leading the charge in the restaurant scene.

These chefs, as well as countless others, are maestros of the kitchen, conducting symphonies of flavor that keep ATL foodies coming back for more. Whether you’re looking for down-home Southern fare or refined fine dining, the food scene has something for every taste, and don’t even get us started with Atlanta food festivals.

Here are 10 of the best food festivals in Atlanta to get you started.

Atlanta’s Kevin Gillespie is a James Beard Award-nominated chef best known for his performance on “Top Chef” and his restaurants Woodfire Grill, Gunshow and Revival. Join Kevin Gillespie as he walks through Atlanta’s Palisades Trail and offers an insider’s look at the Dekalb Farmers Market to prepare a memorable dish for restaurant guests. 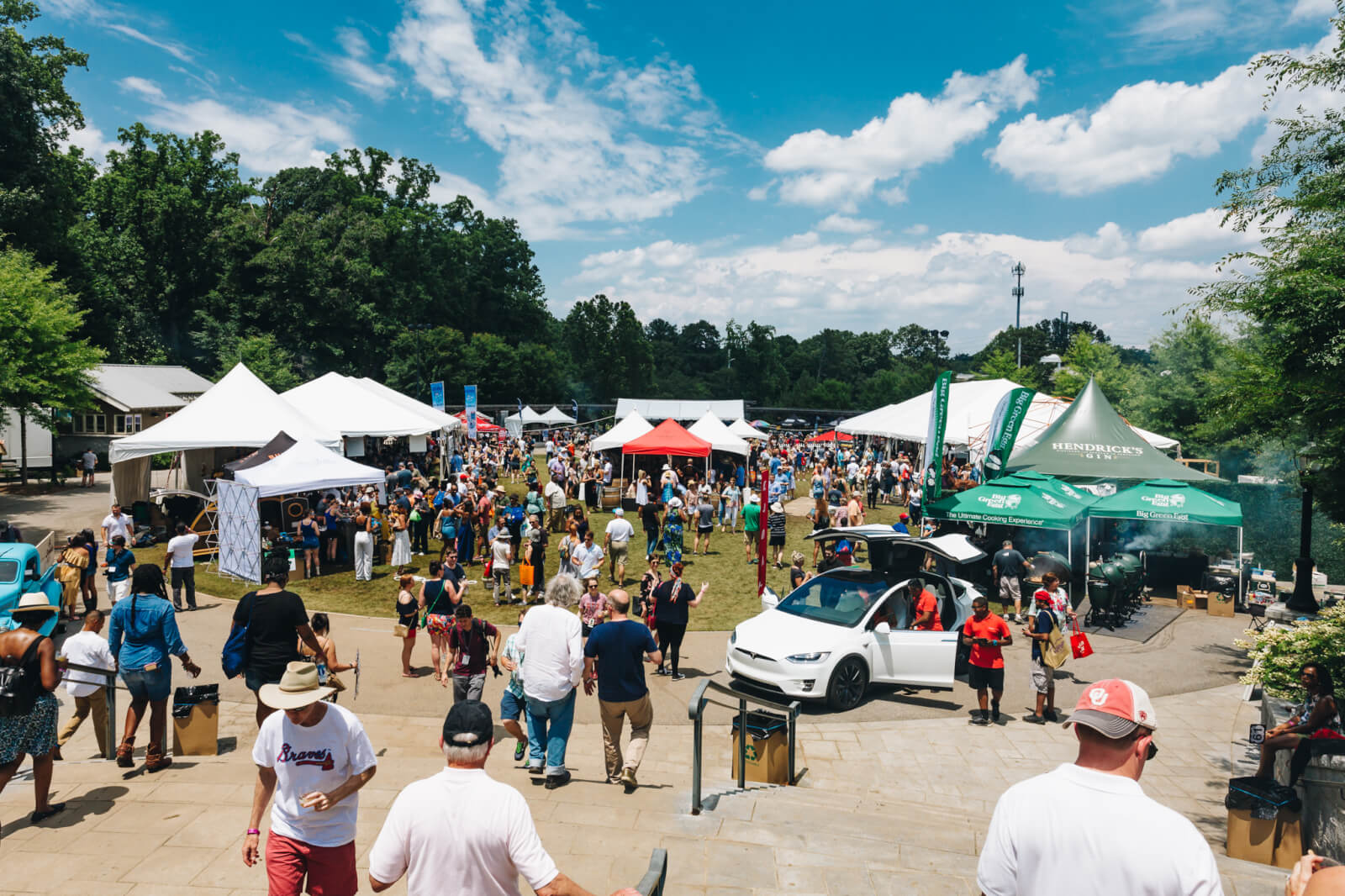 Atlanta has a unique responsibility of being a steward to our neighboring foodie cities in providing the ultimate proving ground to exhibit the South’s culinary mastery. Since its inception in 2010, the Atlanta Food & Wine Festival has sought to champion the indelible stories and unique flavors of the South by providing a pulpit to exalt the culinary experiences of farmers, chefs and mixologists in a four-day celebration of Southern food culture. And it’s gotten better every year with inventive culinary themes, educational programming, curated dinners and, of course, the yearly tasting tents that put the South’s best chefs to task offering their best bites.
When: Spring
Where: Midtown

As we mentioned, Atlanta’s food scene continues to up the ante and redefine itself with established institutions and new concepts finding success in the foodie-filled landscape. And the best way to try them all is at Taste of Atlanta. This annual food festival in Atlanta should be on every die-hard foodie’s bucket list. With live cooking demos, special events and ATL’s top restaurants vying for the title of “Best Taste,” it’s no wonder TofA also keeps the party going throughout the year with food-centric events like the Southern Wing Showdown and Atlanta Meatball Festival. It’s an ATL must.
When: Fall
Where: Historic Fourth Ward Park 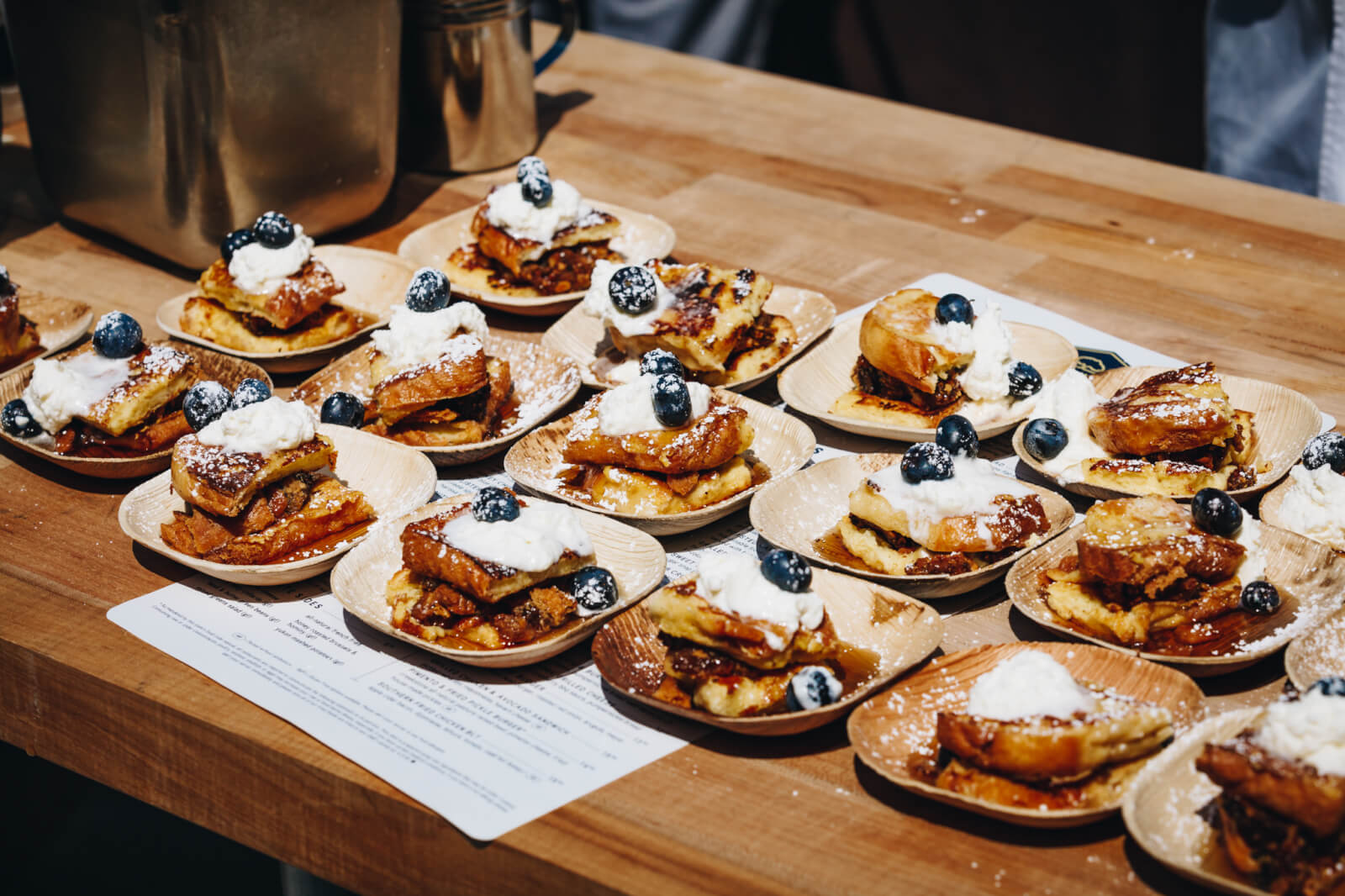 Brunch in Atlanta could be considered the most important meal of the week for some. People plan for weeks in advance while daydreaming of plates piled high with pancakes, French toast and, of course, chicken and waffles. And don’t get us started with bottomless mimosas. We guess that’s why Atlanta Beer Festivals decided that it was time for the Atlanta Brunch Festival. The yearly bonanza unites ATL cornerstones like Einstein’s, The Shed at Glenwood and more into an all-out brunch party at Atlantic Station with as many mimosas and Bloody Marys as you can stomach – but you’ll want to leave room for pancakes.
When: March
Where: Atlantic Station 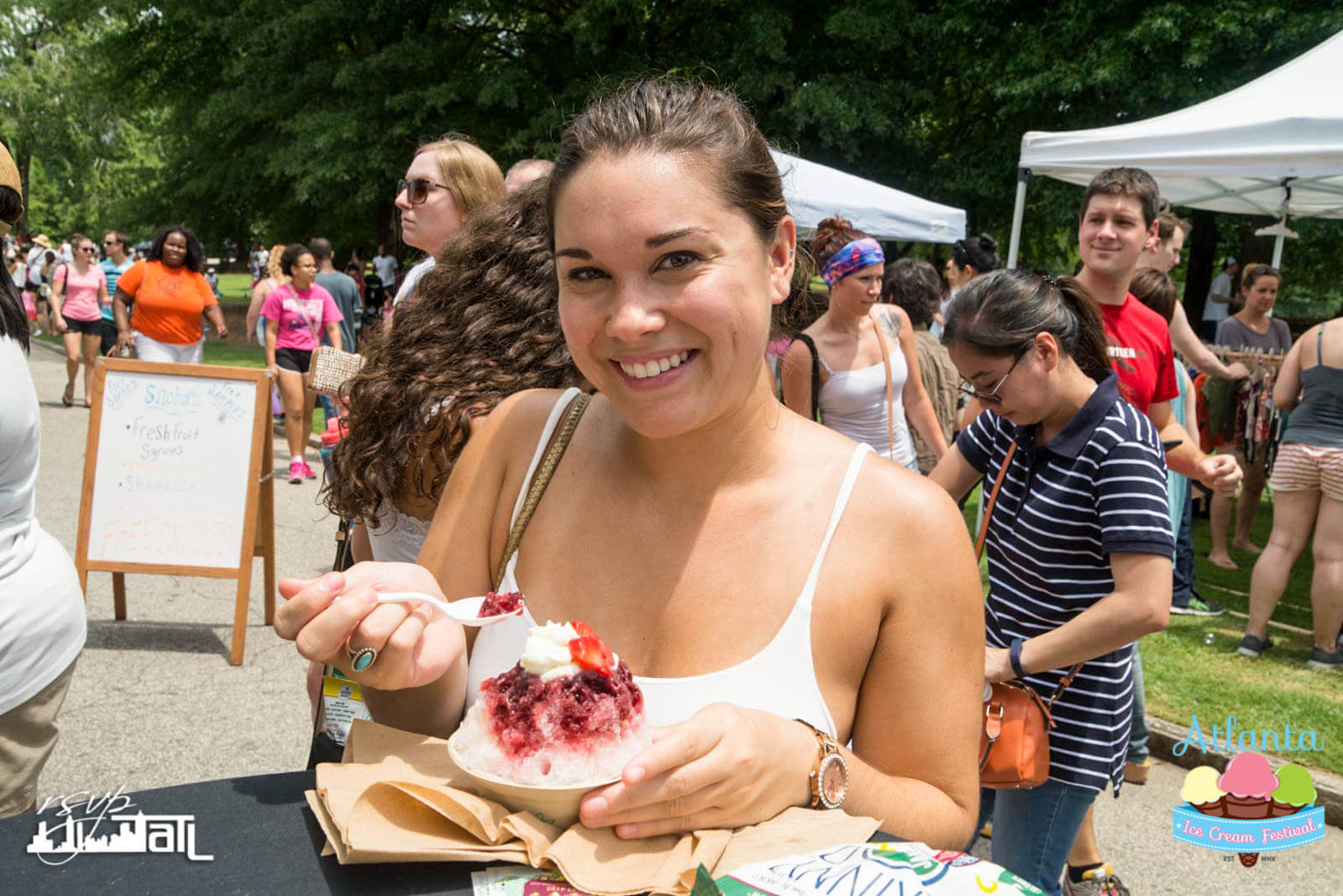 The Atlanta Ice Cream Festival is an annual extravaganza to celebrate the joys of brain freeze and the pinnacle of summer fun. Bringing together an avalanche of frozen treat purveyors to serve up heaping doses of ice cream, fro-yo, popsicles and more, the Ice Cream Festival is the place to binge on ice-cold goodies during this family-friendly food festival in Atlanta’s Piedmont Park.
When: Summer
Where: Piedmont Park, Midtown

Attack of the Killer Tomato Festival 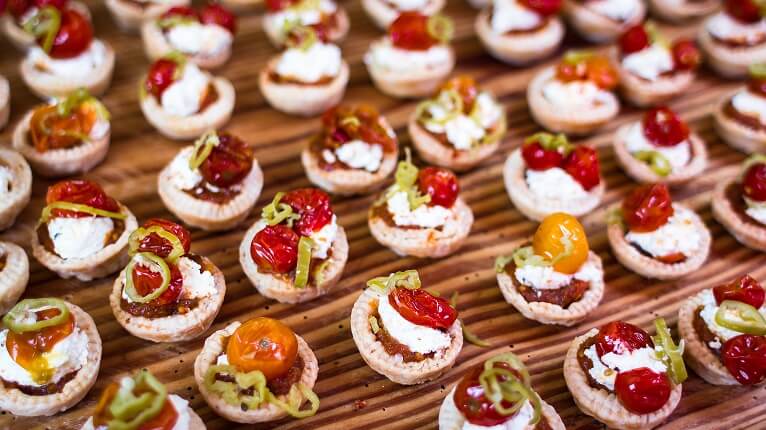 Exactly how it sounds, the red/green fruit gallivanting as a vegetable has its very own festival in Atlanta-and it’s pretty awesome. ATL chef and restaurant magnate, Ford Fry, makes good use of the influx of tomatoes at season’s peak by having the city’s top restaurants and mixologists craft unique offerings from their bounty for the Attack of the Killer Tomato Festival. Yes, that means everything you’ll eat will have tomatoes incorporated into it somehow, from cocktails and appetizers to desserts. Proceeds benefit Georgia Organics at this family-friendly festival that proves tomatoes are more than just ketchup.
When: Summer
Where: Park Tavern

If you didn’t know by now, Atlanta has a preoccupation with the burger. It appears on menus of almost every single restaurant, even spots with fine dining pedigrees, topped with everything from caramelized onions and peppers to truffles and lobster meat. So what better way to prove which ATL burger reigns supreme than with an all-out battle royal, with cheese. That’s where Atlanta Magazine’s Best Burger Battle comes in, pitting the city’s noted restaurants in double-patty combat to see who comes out on top, with the real winner being attendees.
When: October
Where: Buckhead

An entire festival dedicated to chicken wings? It’s happening right here in ATL. Poultry purveyor, Springer Mountain Farms, invites you to wing war like you’ve never seen at the annual Southern Wing Showdown. In this finger-licking-good foray, chefs from across the Southeast battle wing supremacy. Please let there be lemon pepper…
When: Summer
Where: The Fairmont, Westside

Speaking of comfort food, who doesn’t love macaroni and cheese? From growing up on the boxed pasta and powered cheese goodness, the ooey-gooey fave is a staple on most Southern kitchen menus, and the Edgewood Mac & Cheese Festival highlights some of the best soul-stirring offerings. Who wouldn’t want to discover their inner kid over bowls of mac and cheese from the likes of Fox Bros. Bar-B-Q, Marlow’s Tavern and more?
When: October
Where: Walker Park, Edgewood Neighborhood, Eastside 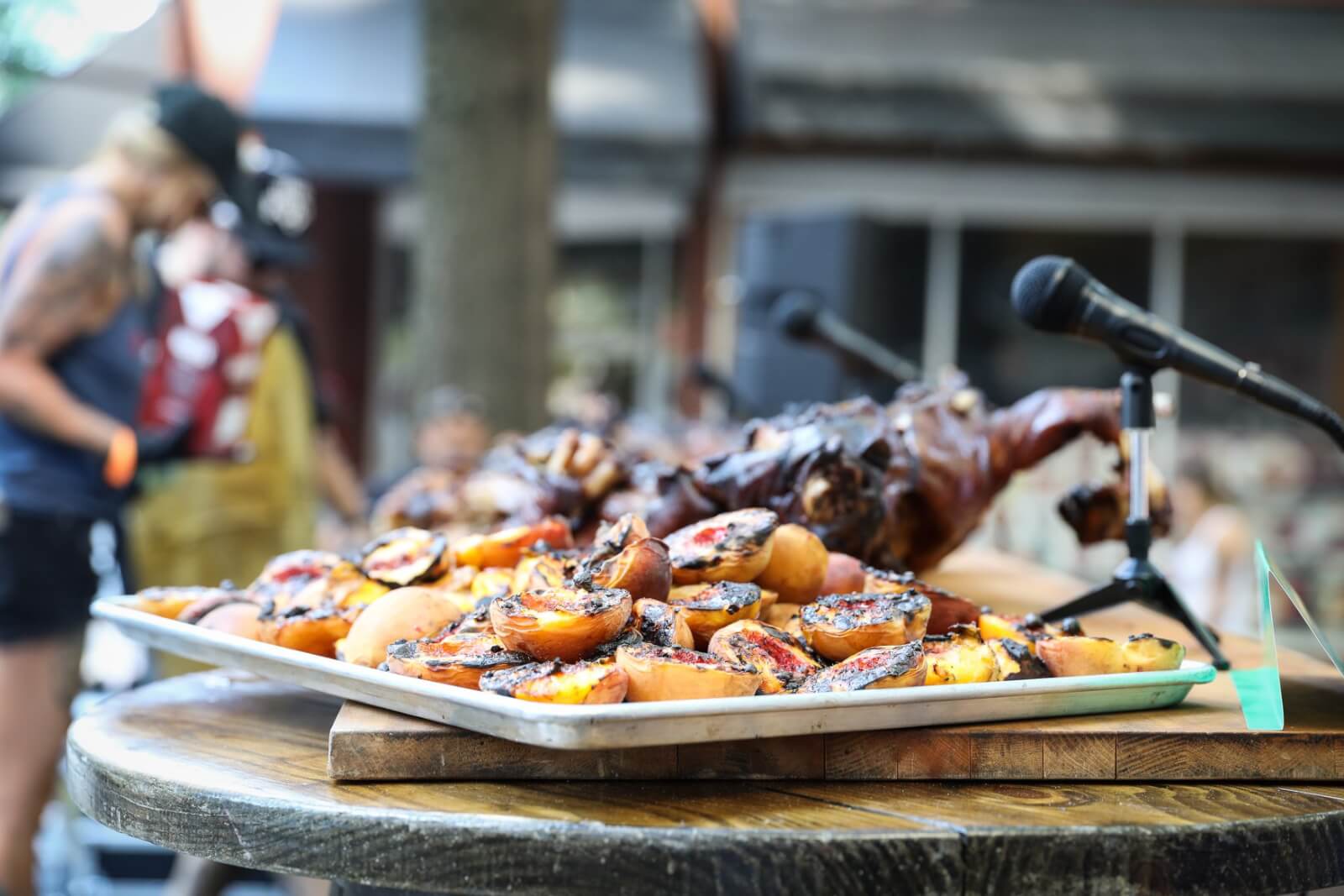 With the peach being the fruit our lovely state is best known for, why did it take this long to have a food festival celebrating its sweet, juicy glory? The inaugural PeachFest kicked off at FlatironCity in the Fairlie-Poplar district Downtown to celebrate the luscious fruit with top local chefs and mixologists crafting traditional and modern takes on Georgia-grown peaches. Ever had peach pizza? What about peach-glazed heritage pork? Peach punch much? Peachfest is an Atlanta food festival that locals and visitors alike will enjoy for years to come.
When: Summer
Where: Fairlie-Poplar district, Downtown Atlanta 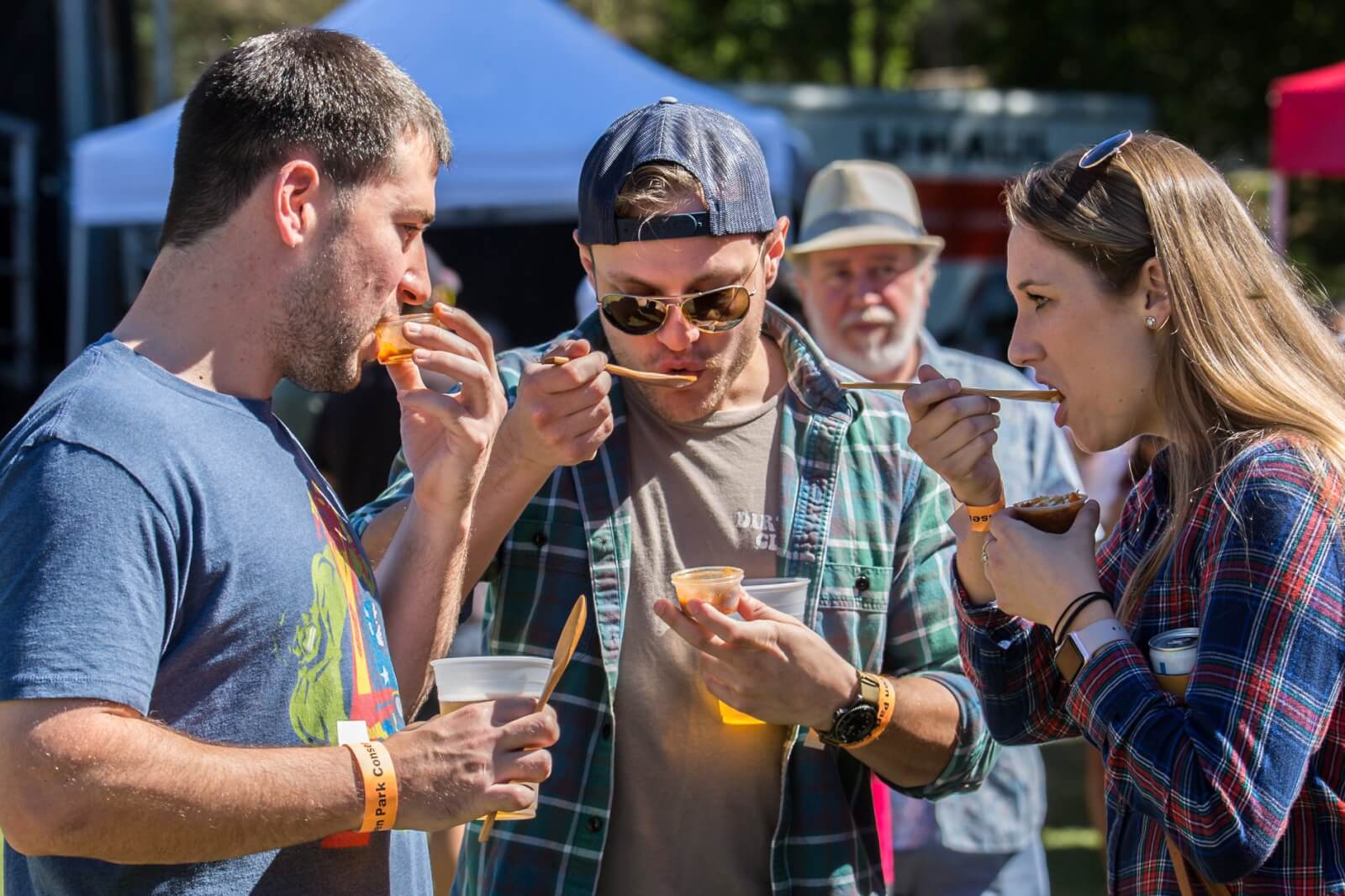 Nothing says fall quite like a warming bowl of hearty chili, and ATL has heaping bowls of it at the annual Atlanta Chili Cookoff. This comfort food clash pits restaurant and amateur teams against one another to settle once and for all who has the best chili game.
When: Fall
Where: Brookhaven

Where To Eat at The Battery Atlanta

7 Ways to Get Outside in Atlanta this Fall