Visit the Most Iconic Public Art Spaces in Atlanta

In ATL, inspiring art is all around you. From towering sculptures and busts of civil rights icons to sprawling trails of murals and art you can literally play on, check out these places for extraordinary city art pieces (for free).

Camille Love is a champion for public art throughout Atlanta and led the charge to revitalize the iconic Noguchi Playscape at Piedmont Park.

Atlanta from the Ashes (Phoenix Rising)

Sculpted in Italy, the James Siegler-designed “Atlanta from the Ashes” is a towering piece of art standing watch over Woodruff Park Downtown. Commonly known as “The Phoenix,” it portrays a woman rising from flames carried by the mythological bird and symbolizes the city’s rise from the ashes after the Civil War to become a titan of the South.

Where to find it: Woodruff Park 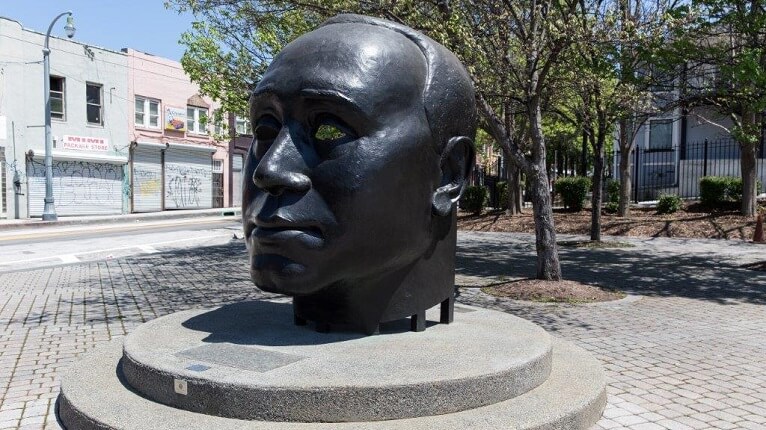 See a neighborhood through the eyes of a civil rights leader. Located on Auburn Avenue and installed for the 1996 Olympic Games, “Through His Eyes” depicts a larger-than-life bust of John Wesley Dobbs, who some consider the unofficial “mayor” of the historic neighborhood who came up with its moniker, “Sweet Auburn.” Openings, where the eyes should be located, allow visitors to see the pride of the area through the famed orator’s eyes.

Where to find it: Corner of Fort Street and Auburn Avenue

Of the many statues and murals of civil rights icon Dr. Martin Luther King Jr. on display throughout the city of Atlanta, “Homage To King” is by far the most dramatic and powerful. The steel monolith designed by Xavier Medina-Campeny on Freedom Parkway was cut into a silhouette of King’s likeness with his arm held high over the King National Historical Park. Catch the piece at sundown and see the sun shining through the opening for a truly breathtaking image.

Where to find it: Corner of Freedom Parkway and Boulevard

In the world of art, a common notion is to “look, but don’t touch” because it would suck to get chili from that Varsity cheese dog you just ate on the incredible Infinity Mirrors exhibit at the High Museum. But the Noguchi Playscape at Piedmont Park is all about interaction. Designed in 1976 by Isamu Noguchi, it is the only playground structure the world-renowned artist ever built and has been revitalized for a new generation of art you can touch. Kids and adults thrill at the beautifully designed and super fun playground/art space.

Where to find it: Piedmont Park 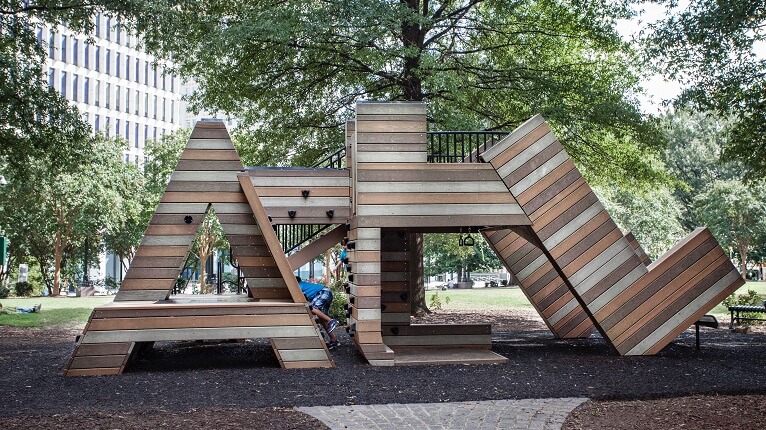 No matter what ATL rap icon Pastor Troy says, there is more play in G-A. And it can be found in Downtown Atlanta at the climbable ATL Playground in Woodruff Park. Conceived by British Columbia designer Jeff Santos, you can truly play in the A and on the A. This accessible piece of art feature the letters A-T-L fashioned into slides, monkey bars and rock climbing grips.

Where to find it: Woodruff Park

In the heart of Atlanta’s most prominent LGBTQ neighborhood, the Atlanta Rainbow Crosswalk in Midtown is as colorful as the diverse community it celebrates. Located at the intersection of Piedmont Avenue and 10th Street, the multicolored crosswalk originally began as a temporary mural to commemorate the city’s Pride festivities, but after the Pulse nightclub shooting in Orlando, more than 20,000 people signed a petition to make it a permanent fixture to commemorate those lost and the city’s most vibrant neighborhood.

Where to find it: Intersection of Piedmont Avenue and 10th Street

This bird is coming in for a landing at the South’s newest sports and entertainment destination, Mercedes-Benz Stadium. The most striking piece of art at the home of the Atlanta Falcons and MLS Cup Champions Atlanta United is the 42-foot-tall falcon perched atop a football from Budapest sculptor Gábor Miklós Szőke. The piece, “Rise Up,” is the largest freestanding bird sculpture in the world. The bird is the word.

Where to find it: Mercedes-Benz Stadium

Atlanta Strong, Off the Wall Murals

Located at Home Depot Backyard behind Mercedes-Benz stadium, a girl flexes her muscles while another stands strong. “Atlanta Strong” by Ernest Shaw is one of the new, 30-plus murals installed around Atlanta as part of the Off the Wall murals initiative by the arts organization WonderRoot and the Atlanta Super Bowl Host Committee. The large scale works of art depict Atlanta’s civil rights and social justice journey.

Where to find it: Home Depot Backyard (behind Mercedes-Benz Stadium)

Atlanta’s art scene is on full display on the walls, underpasses and even the ground of many of neighborhoods we call home. While we’re no stranger to off the wall graffiti in all its glory, it’s the annual art events like Living Walls, Forward Warrior and Outerspace Project that turn the distinct canvases of our city into thought-provoking works of art that unite communities. And they are continually changing, so when you find a piece while cruising through Cabbagetown or strolling on the Atlanta BeltLine, be sure to take a pic, because it may be gone before you know it.

Where to find it: Various Atlanta neighborhoods

EatKrog Street Market started out as a simple idea: Turn the 1889 Atlanta Stove Works factory into a place where in-town residents can go to buy produce, goods and enjoy a few restaurants.

EatGot a rehearsal dinner to plan in Atlanta? While Atlanta has an abundance of beautiful scenery with gorgeous backdrops for the special event, there are several hidden gems that would be the perfect spot for your evening.

NewscredTreat Mom to a special cocktail on Mother's Day.

NewscredWhat's on your Atlanta bucket list? Perhaps you want to visit a museum with your family or catch the latest shows.

12 Indoor Things to Do in Atlanta

AttractionsVisit some of Hollywood's fave filming locations in Atlanta.