Anyone who has stumbled across one of ATL’s most diverse and eclectic neighborhoods, Little Five Points, knows is that it’s full of a character and style all its own, especially when it comes to music. You hear it as you walk along Euclid and Moreland avenues —  everything from street performers bellowing out chords to jazz, rock, sultry R&B flows and beats from African drums. These sounds envelop a neighborhood that embraces its weirdness and is home to musicians and artists like Ruby Velle and the Soulphonics. Their unique style of soul mixed in with a little funk makes the perfect soundtrack to this cool neighborhood. Little Five Points’ music venues draw a wide variety of bands and music styles, so no matter your musical flavor, these are the best spots to hear live tunes in L5P.

Join Ruby, lead singer of Ruby Velle and the Soulphonics, as she explores the creative places of Atlanta’s Little Five Points neighborhood.

When night falls and lights begin to shine in Little 5, look for the neon star that leads you to Star Community Bar. The former bank turned dive bar is home to some of the best live music around and to ATL’s burgeoning independent artists looking to make their big break. There is something special every day of the week to enjoy from comedy nights and DJ sets to live music Thursday through Saturday and an even a more cozy performance space for singer/songwriters called The Little Vinyl Lounge. Grab a PBR and let your hair down because Star Community Bar is a dance party waiting to happen.

If variety is the spice of life, when it comes to music, Aisle 5 is living it well with a constant cadre of rotating acts from multiple genres. From nationally touring acts to local faves like CLAVVS, Rahbi and more, the intimate venue puts guests in the rhythmic and electric head space of their favorite artists for wildly engaging shows you won’t soon forget. 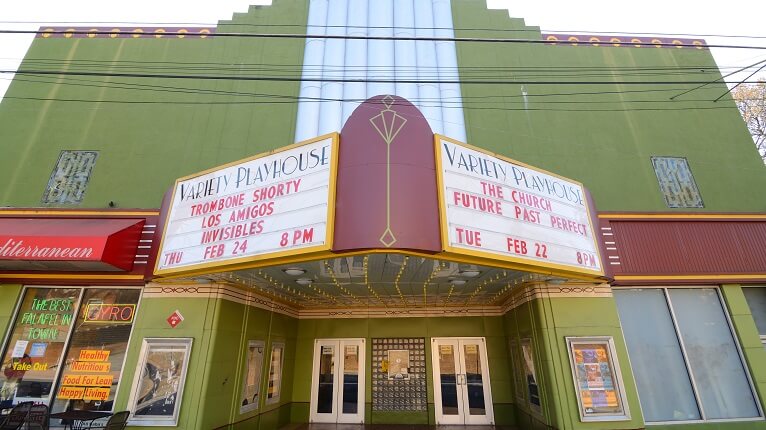 To the uninitiated, a stroll past the Variety Playhouse is liable to transport you to a time when cinemas were the primary source of entertainment. But if you listen and journey inside you’ll find one of the city’s top live music venues. Having been everything from a movie house and performance space to even a community gathering spot in its former lives the Variety Playhouse now has the esteemed reputation as being one of the best places to catch concerts from mainstream and independent artists in the city. From cover bands belting out hits from Sublime and The Allman Brothers to EDM beats and country twang, there’s something for everyone at VP. 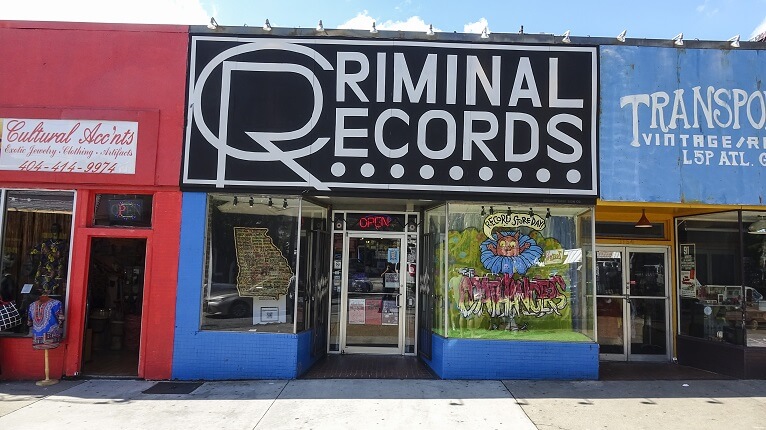 In a time where music is composed of data and consumed digitally across apps and smartphones, it’s good to see places like Criminal Records paying homage to the musical mediums that brought us to where we are today. The locally owned and independent record shop sells everything from vinyl records and CDs to cassettes and DVDs and played an integral role in co-founding the globally recognized Record Store Day. It’s also been a L5P mainstay since 1989, a place where artists have been known to pop up for impromptu in-store autograph signings and one-of-a-kind live performances you have to see to believe. You never know who you may run into from your favorite DJs searching for the perfect vinyl for a set or ATL faves like Donald Glover, Janelle Monae and The Black Lips adding tunes to their collection. 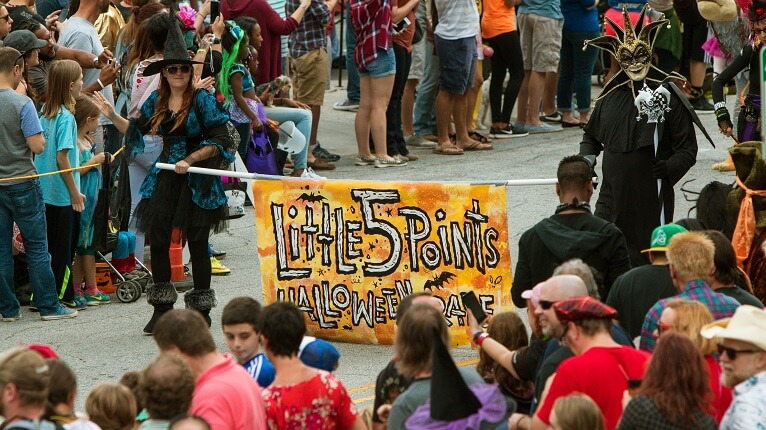 Sometimes you don’t need a stage to let your voice be heard. One of the best parts of exploring Little 5 Points is the variety of talented individuals you may happen upon just walking to boutiques and restaurants like The Porter and Little 5 Corner Tavern. And you can typically find them showing off their skills at Findley Plaza, the garden and tree-filled epicenter of L5P. Once a part of Euclid Avenue, the courtyard is now a space for the public to gather and take in free entertainment from singers, musicians and even poets. You can also take in a show during parades and events like L5P Halloween Festival and Parade and Little Five Arts Alive where stages are set up for bands to show their stuff.

AttractionsSummer's here and ATL's outdoor attractions are fun for the whole family.

Best Outdoor Attractions and Activities for Kids in Atlanta this Summer

NewscredThere’s no doubt that Atlanta’s world-class attractions and destinations make this city shine bright like a diamond.

NewscredAs the seasons change and breezes begin to feel more warmly refreshing (rather than just cold and sharp), Atlantans seem to make a beeline for restaurants and bars that have excellent patio seating.

EatWhile Southern cuisine reigns supreme in Atlanta, we can't forget the fierce loyalty people have for barbecue – and it can get pretty contentious.

Things to doAtlanta is quickly becoming the town of double takes, because you never know whether or not that familiar-looking person you spied at the bookstore is the doppelganger of the Hollywood celebrities you’re mistaking them for...

Mai Tai or Moscow Mule? Experience the World Under One Roof in Atlanta's Best Lounges