Get Your Game On at These Atlanta Restaurants and Bars

Atlanta bars and restaurants have evolved over the years, determined to emphasize the overall dining experience and not just the food. That’s what makes these some of the most fun bars in Atlanta. They put the fun into waiting by offering competitive games and activities ranging from mini-golf and bowling to Ping-Pong and shuffleboard to keep you thoroughly entertained before, during and after dinner. So if you find yourself waiting for a table at one of the spots listed below, don’t pull out your phone to play a game or check your e-mail. Get into the game and have some fun at the best game bars in Atlanta! 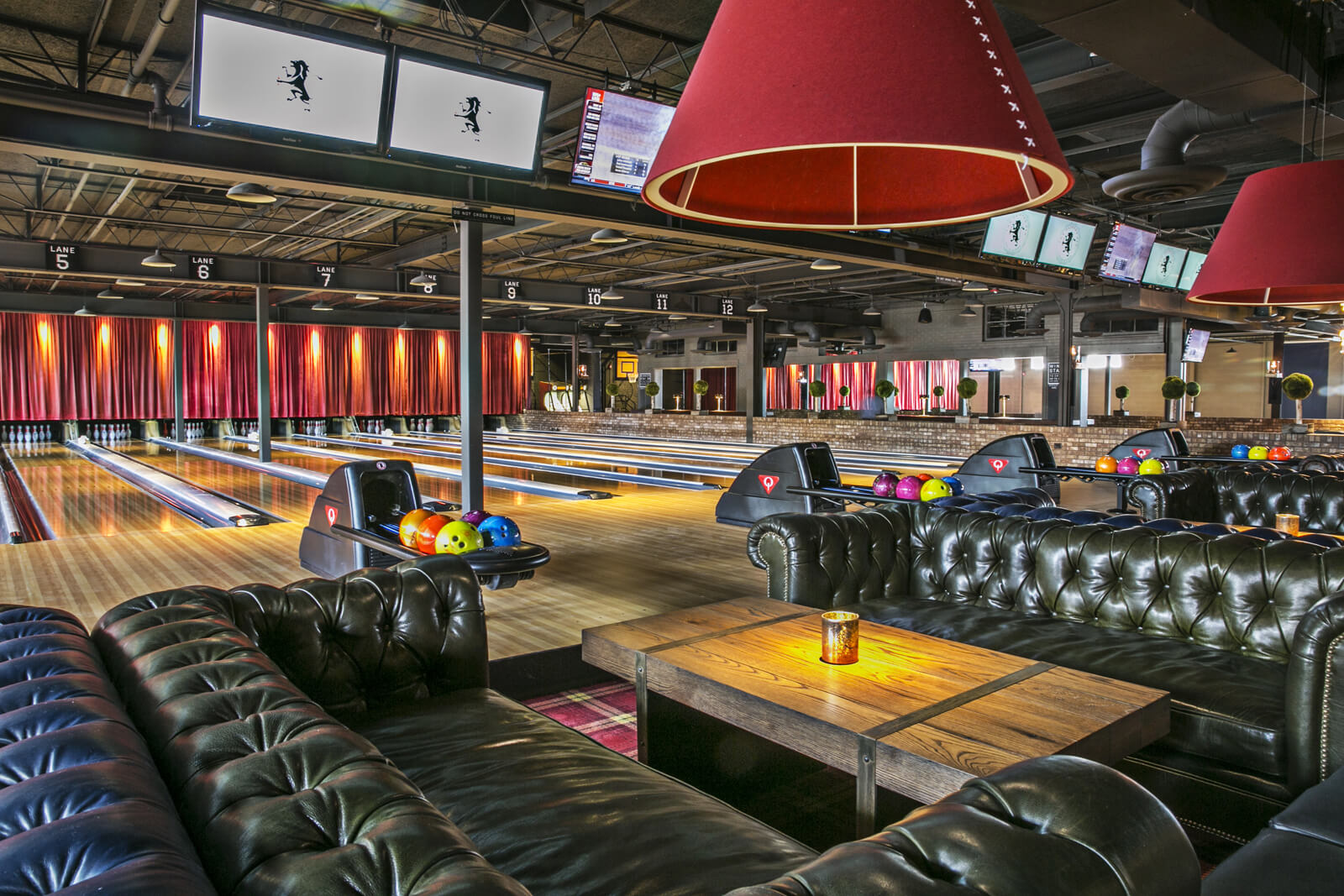 The best way to describe The Painted Pin is as an adult playground. The Buckhead entertainment complex features chef-driven pub fare perfect to build your appetite for competition in games like bowling, bocce ball, shuffleboard, darts and even Skee-ball — all while downing beers and craft cocktails with your friends or for a group date night. Whether it’s here or on the Westside at Painted Duck trying out duckpin bowling, be sure to bring your A game.
Where: Buckhead; 976 Brady Ave. NW, Atlanta, Ga. 30318 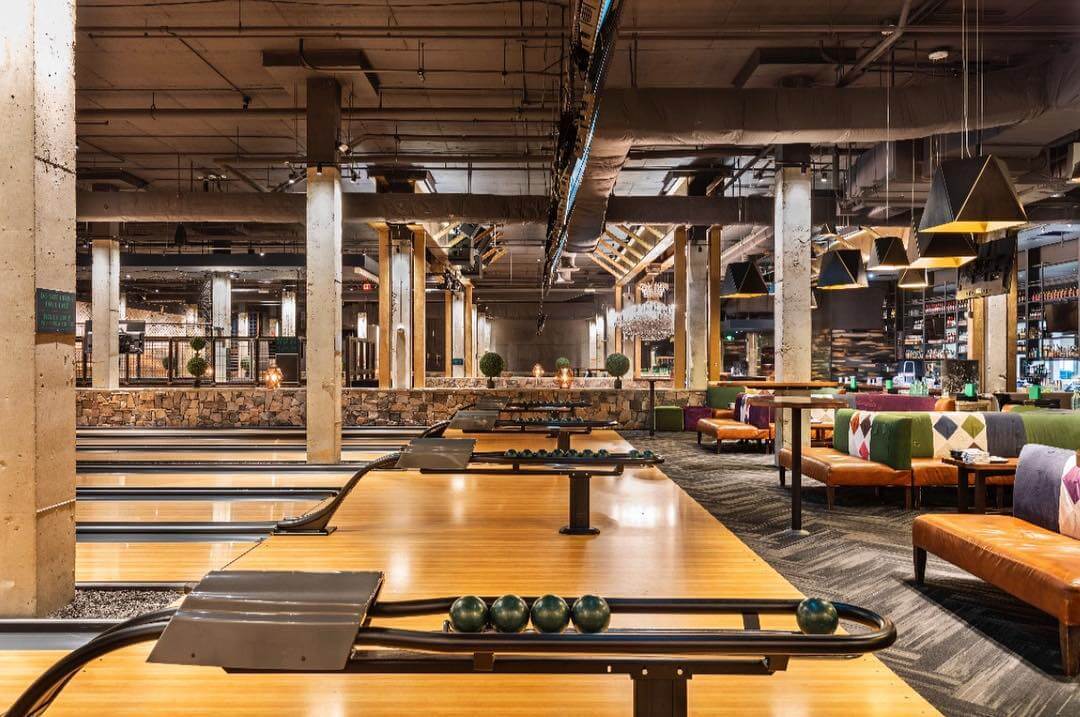 From the team behind Buckhead bowling destination, The Painted Pin, comes a whole new foray into the game-staraunt scene. The Painted Duck brings interactive games like horseshoes, air hockey, and shuffleboard to the Westside, but its claim to fame is duckpin bowling. A variation of traditional bowling, duckpin miniaturizes the bowling ball and pins for an even more competitive experience.
Where: Westside; 976 Brady Avenue NW, Atlanta, GA 30318 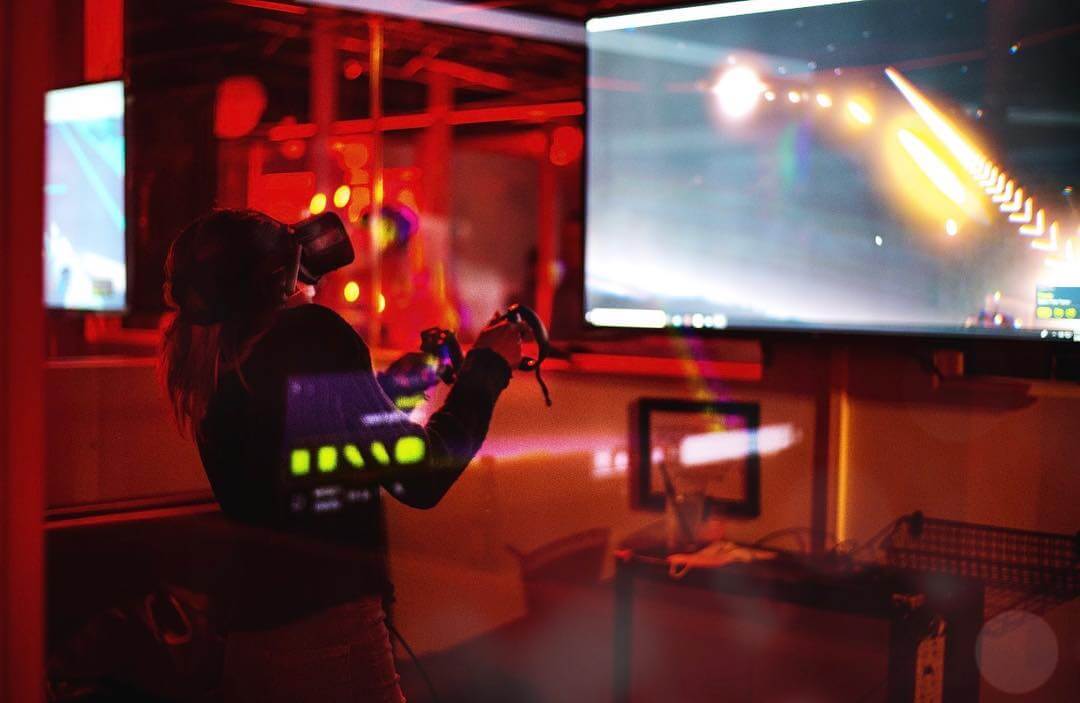 The vibes are virtual at Revery: VR Bar, Atlanta’s first virtual reality bar. The Midtown escape is the ultimate sensory experience dropping you into an all-encompassing world to shoot, solve puzzles, and live out your pro sports fantasies all from behind a set of high tech goggles. The world is changing.
Where: Midtown; 728 Monroe Drive NE, Suite C, Atlanta, GA 30308 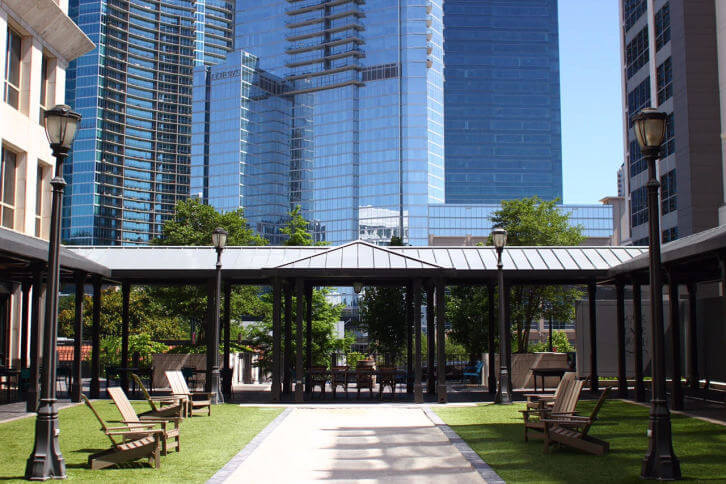 Lively games of bocce ball over a Pimm’s Cup while eating fine Southern cuisine may seem like something out of a country club, but you can get that experience right in the heart of Midtown at Empire State South. Break out your finest seersucker suit and take to the beautiful bocce court flanked by the equally amazing Midtown skyline. It’s game time!
Where: Midtown; 999 Peachtree St. NE #140, Atlanta, Ga. 30309

Glorious eats from the coast await at this Westside seafood house. The Optimist brings the party with kickin’ cocktails and mini-golf fun in the courtyard. Aim for the sound of the ball dropping into the cup.
Where: Westside; 914 Howell Mill Road, Atlanta, Ga. 30318 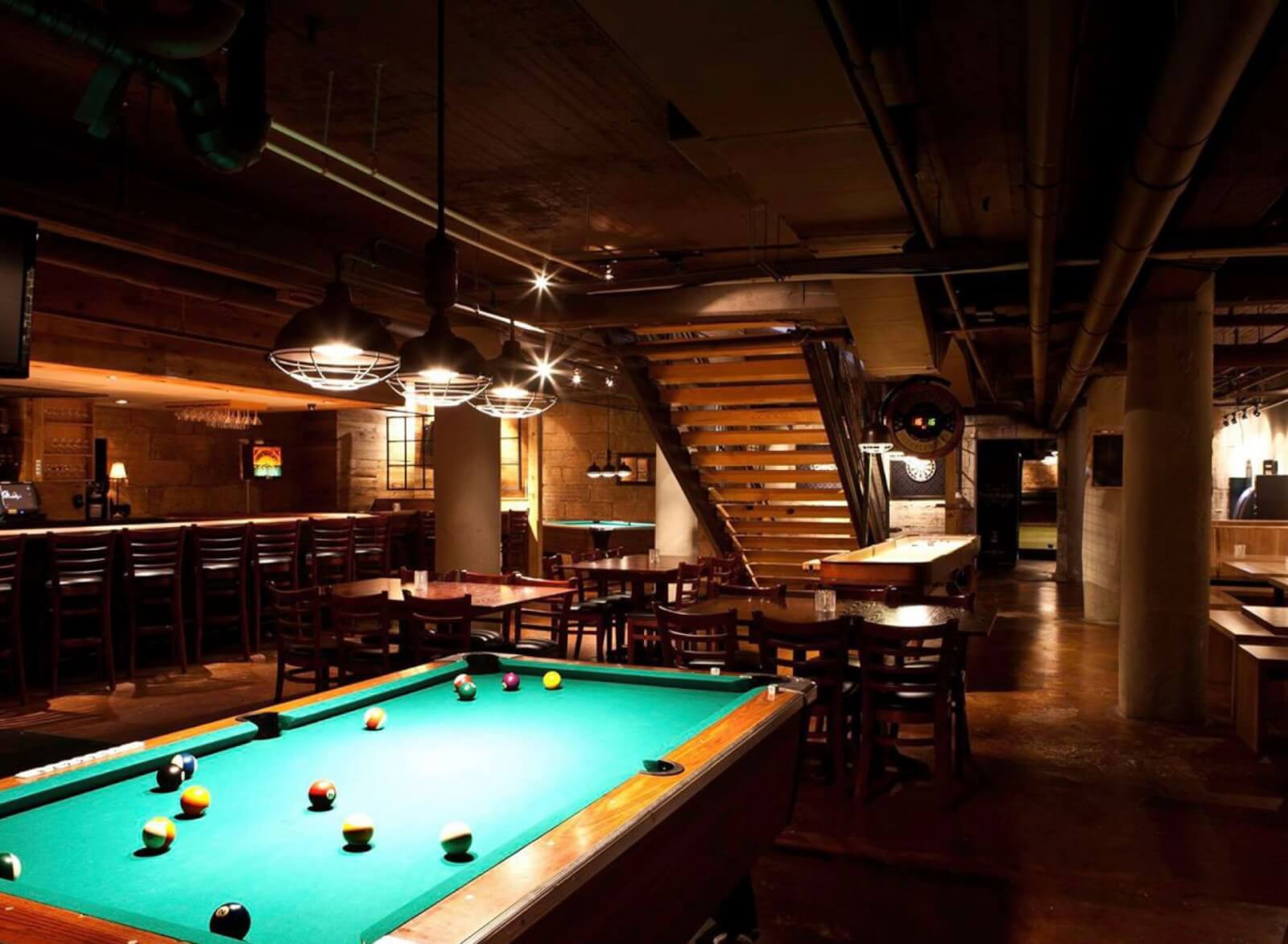 Beers and awesome bar food? Check. An underground “Fight Club” — style bocce ball court? Double check. Ormsby’s is the place to be on the Westside. Grab a burger or dog at this basement beer haven and descend even further for a game of bocce or billiards.
Where: Westside; 1170 Howell Mill Road, Atlanta, Ga. 30318 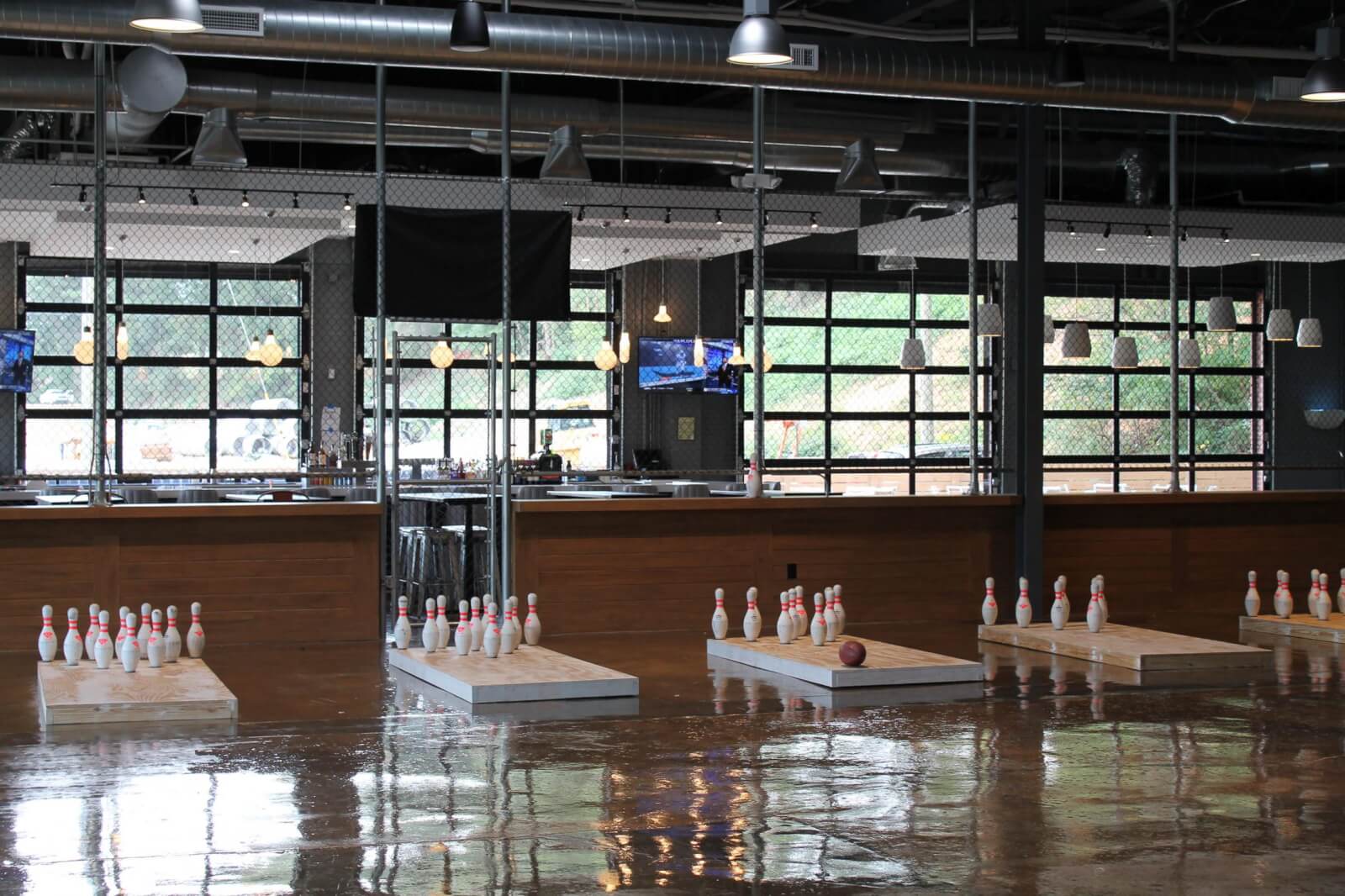 Have you ever wondered what would happen if football and bowling had a baby? Would they nature it? Would it just be awkward and weird? Well, such a union exists at Grant Park haven, Pin & Proper. The football-bowling hybrid restaurant not only delivers on tasty grub fare but specializes in “pinfall,” a game where you do your best Matt Ryan impersonation and attempt to drill down some pins.
Where: Grant Park; 1039 Grant Stree SE D10, Atlanta, GA 30315 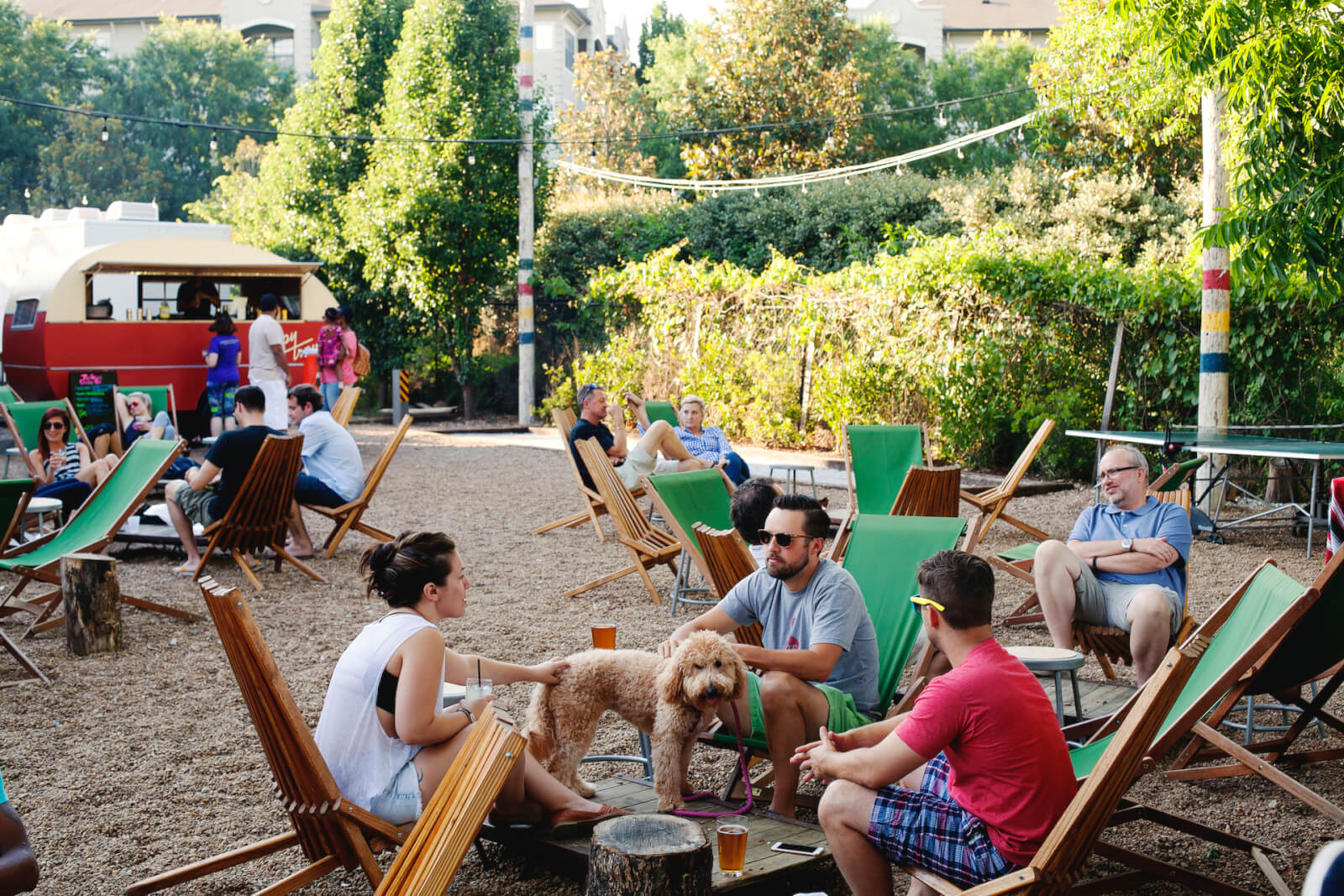 This Atlanta BeltLine restaurant and bar markets itself as an “adult summer camp,” and it couldn’t be more right. With a menu of camping-inspired eats and copious amounts of beer, Ladybird Grove & Mess Hall brings the real fun with a wide variety of games like corn hole, shuffleboard and Ping-Pong to keep you and your friends entertained.
Where: Eastside; 684 John Wesley Dobbs Ave. NE, Atlanta, Ga. 30312 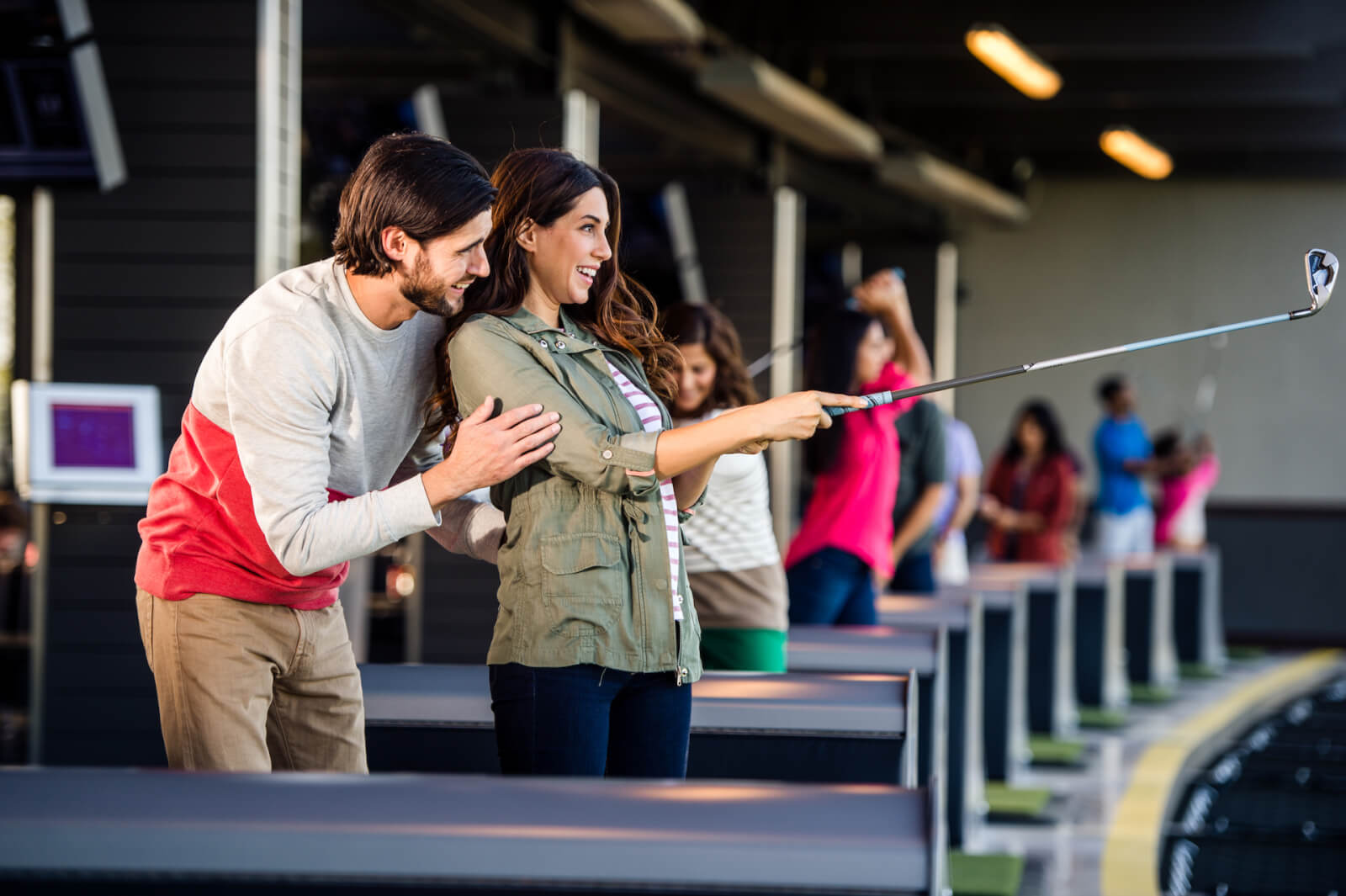 Unleash your inner Arnold Palmer and toss back a few boozy John Daly’s at Topgolf. We can all get down with a menu of insane bar bites, curated cocktails and competitive golf games that show how bad you really are at golf.
Where: Westside; 1600 Ellsworth Industrial Blvd. NW, Atlanta, Ga. 30318 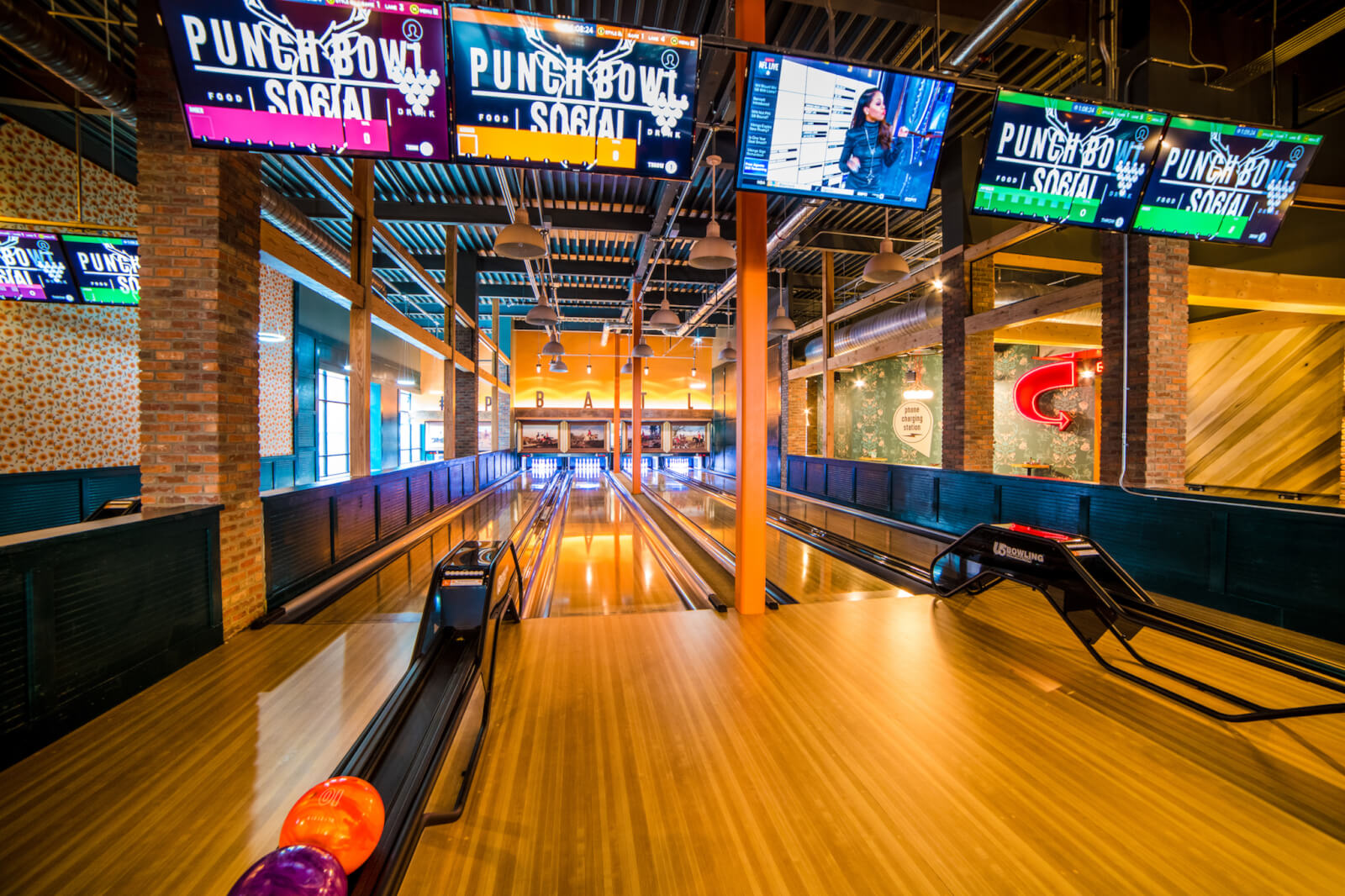 Many may think that The Battery is all about baseball, but Punch Bowl Social has literally changed the game. The massive emporium at the home of Braves is stocked full of glorious eats, craft cocktails, and games on games on games. With everything from bowling and a vintage arcade to karaoke and virtual reality, you can’t help but get in the game at Punch Bowl.
Where: The Battery; 875 Battery Ave SE Ste 720, Atlanta, GA 30339 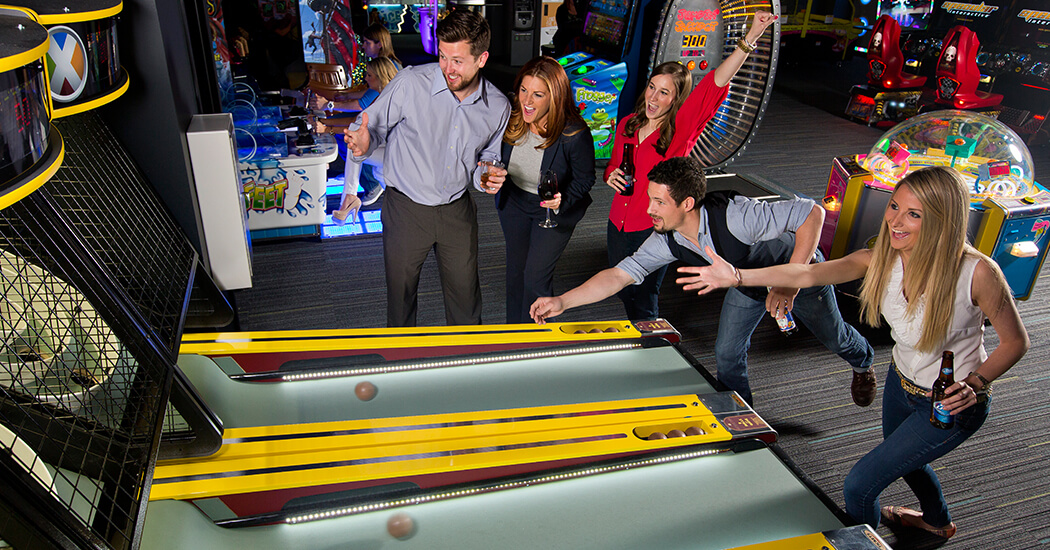 Bring the kids, colleagues or besties for the ultimate game night overlooking Centennial Olympic Park. Start with 10-foot game of Connect 4 and end with a game of Pac-Man Smash or automated beer pong (make that “Pong 180”).
Where: Downtown; 275 Baker St., Suite B, Atlanta, Ga. 30313 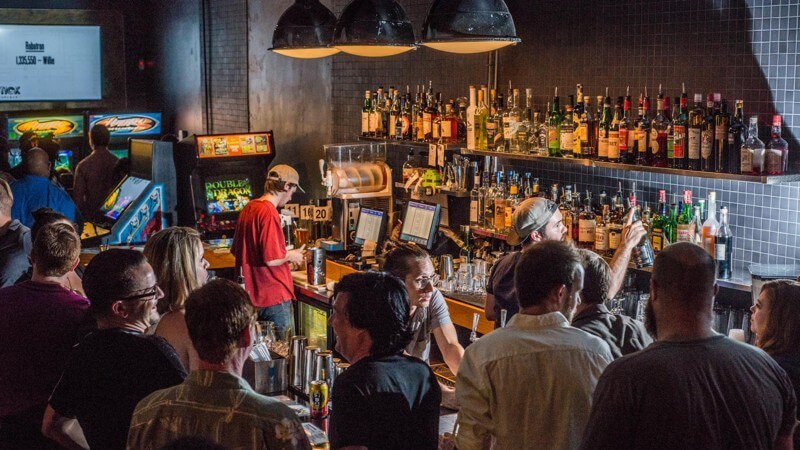 Things to DoSports in Atlanta is serious business, especially collegiate sports. Walk down one city block and you’re sure to see at least a couple people decked out in their team colors and gear, and it doesn’t even have to be on a game day.

ArticlesWhichever kind of Jewish food you love, it's here at one of these Atlanta restaurants.

Where To Find The Best Jewish Food in Atlanta

ArticlesEating out for Easter? Atlanta restaurants are ready for you.

Hop To It: Where To Get Your Easter Brunch On!

ArticlesSpring has sprung, and it’s time to get out and about. Bloom like the flowers around us, and check out some of these events and activities.

Cool Things To Do In Atlanta In April

ArticlesGot a rehearsal dinner to plan in Atlanta? While Atlanta has an abundance of beautiful scenery with gorgeous backdrops for the special event, there are several hidden gems that would be the perfect spot for your evening.