When you think about Atlanta nightlife, one destination always comes to mind – Edgewood Avenue. The vibe. The culture. This storied strip is a melting pot of excitement, and with a surge of bars and music venues setting up shop in Old Fourth Ward on Atlanta’s Eastside, Edgewood has become an essential part of the ATL experience. It’s a place to dive into a sea of good times emblazoned with amazing cuisine, lively entertainment and signature art that define the city, all built in a neighborhood steeped in history and legacy. So let’s take a journey into hot spots that exemplify Edgewood Avenue.

Melding his love for music and food, DJ and restaurateur Karl Injex opened The Sound Table in 2010 bringing a unique restaurant/club hybrid to O4W. 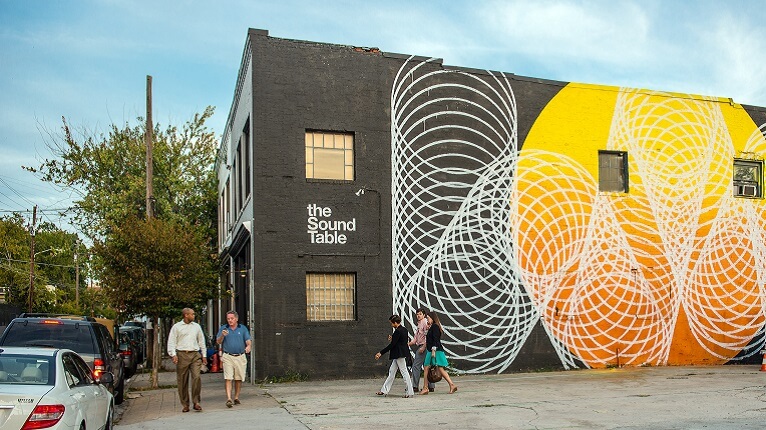 Wildly imaginative pop-up dining concepts. Interactive art installations. Rafter-shaking DJs and mini-concerts. When DJ and restaurateur Karl Injex conceived The Sound Table in 2010, who would have thought he’d be creating an Edgewood Avenue mainstay? It’s a venue that not only broke down the barriers between dining and music, but also united them in harmony and galvanized the nightlife scene, bringing with it an authentic melting pot of cultures and subcultures that embody the ATL experience. It’s an experience entranced by hip-hop and vibes with one-of-a-kind cuisine.

The name says it all, and if that isn’t enough, the boom box facade tells you what you’re in for at The Music Room. Adorned with speakers for windows, volume knobs and EQ levels for doors and an overhead tape deck, The Music Room is a 1980s’ sound machine come alive and is the go-to destination for live tunes on Edgewood. And the vibes are aplenty in the diversity of acts bringing their unique sound to the stage. From Jeezy and Ruby Velle & The Soulphonics to DJ Kemit and Ursula 1000, you’re guaranteed a lively experience when you step foot through the bass-heavy doors. 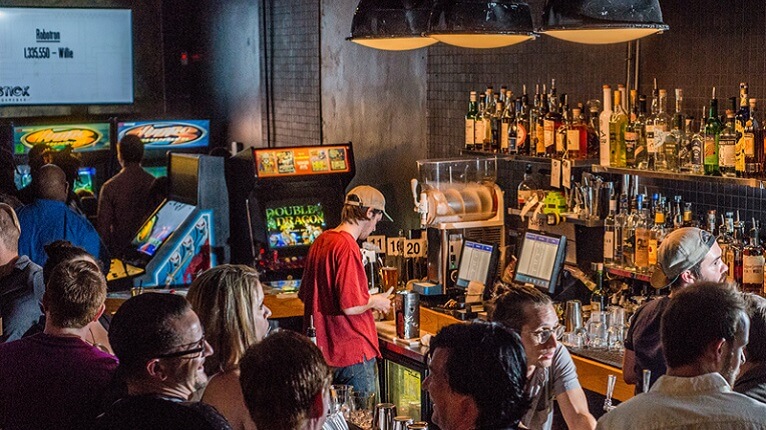 If you want to overload on fun and nostalgia in arcade format, then Joystick Gamebar is the place for you. The bonus? There’s plenty of beer plus cocktails to make your defeat in Ms. Pac-Man all the more bearable. The Edgewood Avenue gaming spot is the perfect balance of interactive excitement from days long before the advent of smartphone fruit slashing and jewel matching. We’re talking throwbacks ranging from Mortal Kombat at Space Invaders to NBA Jam and Galaga. Go for the high score and amp up your nightlife at this awesome arcade.

A little beer goes a long way, especially when it’s all from the great state of Georgia. That’s where the aptly named Georgia Beer Garden comes into play. The neighborhood beer garden swings for the fences by showing mad local love for more than 110 brews made exclusively in Georgia. Featuring every Georgia brew from SweetWater and Arches to New Realm and Scofflaw, this outstanding outdoor beer haven is the perfect spot to celebrate our state’s craft brewing renaissance.

Lively sports bar and Chicago institution, Harold’s Chicken & Ice Bar, is right at home on Edgewood Avenue. The cozy restaurant not only brings the masses with its golden, crispy fried chicken offerings, but also drives them to funky town with live entertainment including bands, DJ sets and even karaoke. The best part is that Harold’s brings the party with late-night hours even during the week (because you never know when you may want chicken and waffles with a side of live music). 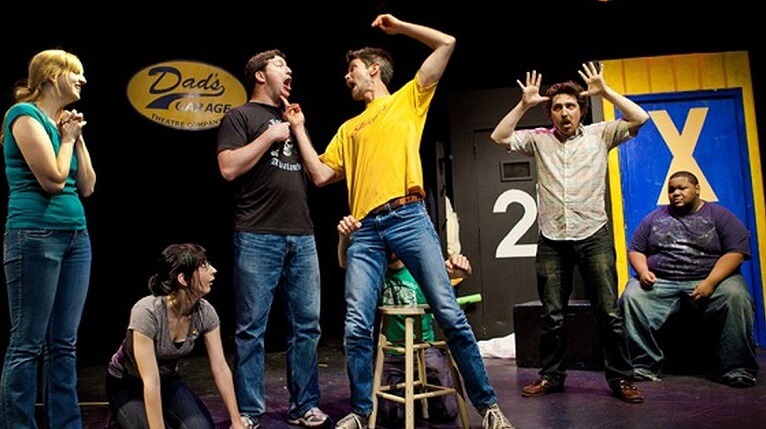 What may seem like a church on the outside is preaching a new kind of gospel inside. And it’s all about laughs. That’s where you’ll find nonprofit theater outfit, Dad’s Garage. For more than 20 years, the Atlanta comedy troupe has opened the community to new levels of funny, tackling topics from the weird to the hot-button with a sense of responsibility and humility as stewards of laughter. Whether it’s improv from comedy heavyweights or classes to teach the craft, Dad’s Garage does it all and also brings a yearly cavalcade of scripted performances that will make you laugh, cry and question the sanity of the Dad’s gang.

Irreverent, entertaining and quite possibly a little sacrilegious, Sister Louisa’s Church of the Living Room & Ping Pong Emporium is an ATL institution in the vein of The Varsity and Clermont Lounge. Simply “Church,” this holy-themed bar is the no-frills fun you’ve been missing, serving up dirt-cheap beers, tongue-in-cheek bathroom humor and questionable art in a vibe perfect to kick off your Edgewood exploration with a bang. Just don’t take it too seriously. As they say, “It’s a bar!”

Full of pasta and panache, Noni’s Deli brings the neighborhood restaurant vibe to Edgewood with belt-loosening eats and double vision-inducing drinks that in and of itself would make for a solid night out. But the good times don’t stop there. Noni’s turns it to 11 with weekly events like Cinema Paradiso showing the finest in pop culture and blaxploitation films, epic DJ sets, and even open mic nights and Dungeons & Dragons learning sessions. You’re guaranteed to have a story to tell at Noni’s.

EventsLooking for ways to entertain the kids and create lasting memories as a family this holiday season?

NewscredAtlanta is a city full of surprises and, while it’s fun to explore and discover on your own, sometimes it helps to have the inside scoop.

NewscredAtlanta’s lineage of music royalty runs deep. From the “Empress of Soul,” Gladys Knight, to the “King of Crunk,” Lil Jon, the city has birthed a legacy of artists who have rapped, sung and "beatboxed" their hometown’s indelible spirit into the key of songs that have made us laugh, cry and simply move our bodies for decades.

Things to doIf summer break has you stressing over things to do with the kids, fret no more.

NewscredClink clink, ATLiens! Sip safely and throw your own personal happy hour with to-go drinks around the city.

NewscredGet to know Atlanta in a unique and fun way, with these awesome tours and experiences.

Experience Atlanta Like a Local with these Sightseeing Tours