The Atlanta BeltLine is the place to find amazing art such as this massive mural.

With so many different Atlanta neighborhoods, each with its own personality and exciting vibes, it can be hard to find the common thread that unites the city as a whole. While proximity to incredible cuisine and eye-popping art is a common denominator found from Old Fourth Ward to Midtown and more, that common thread is a lot bigger than you think. Just take a tour of the Atlanta BeltLine Eastside Trail. The former railway corridor has become a hallmark of ATL’s urban redevelopment and prospers as a vital connection to our favorite neighborhoods. From Krog Street Market to Ponce City Market, we’re rounding up the best stops to hit as you spend a day on the BeltLine.

Start your BeltLine tour with a much-needed energy shot at LottaFrutta. The popular Old Fourth Ward mainstay from fruitologist Myrna Perez serves up delicious fresh-cut fruit cups, smoothies, sandwiches and salads in a funky and festive space on Auburn Avenue well worth the stop to get your BeltLine adventure under way. 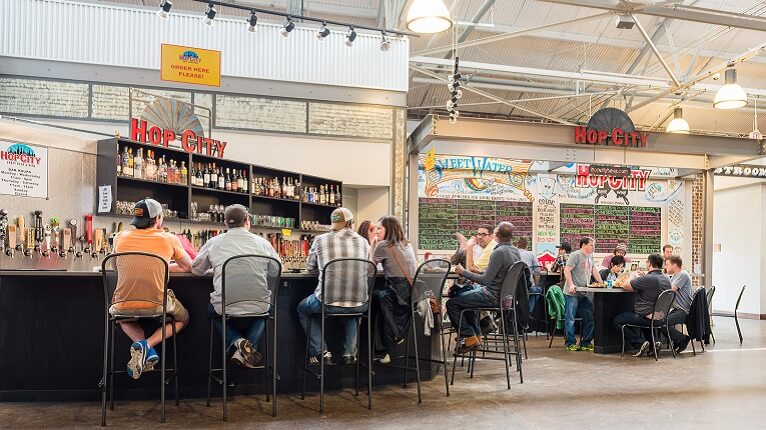 Who doesn’t love Krog Street Market?! Since opening in 2014, the expansive mixed-used development has been home to delicious Mexican eats at Superica, fiery-hot chicken at Richard’s Southern Fried, masterful burgers at Fred’s Meat & Bread and the list goes on. Pull up a stool at Hop City Beer & Wine for a frothy pint or get your shop on at The Merchant as you take in the industrial charm and one of the finest food halls around. 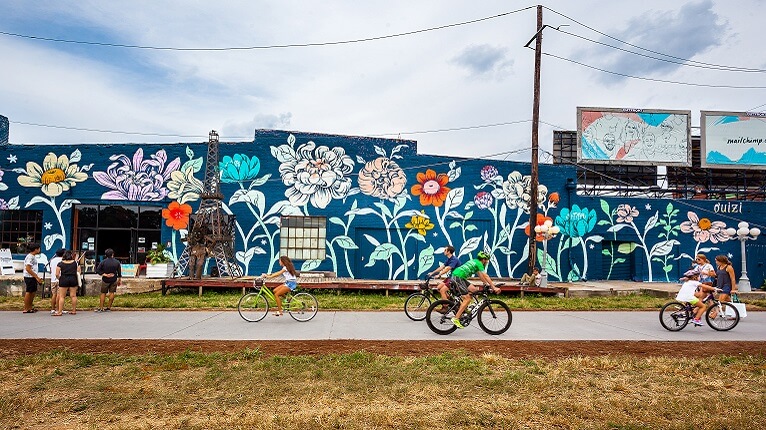 From massive murals and ironworks to tiny doors and interactive dioramas, the Atlanta BeltLine is the place to find a plethora of amazing art — but you have to know where to find it. Murals change out every year, so when you see something that stirs your emotions, be sure to take a pic because it may not be around for long. Commonly found along the way on most underpasses and any place with a massive wall perfect for a funky canvas, artwork ranges from ornate geometric masterpieces like HENSE’s color-popping work under Virginia Avenue to Rising Red Lotus’ thought-provoking Abhaya Brings Teachings of Love. 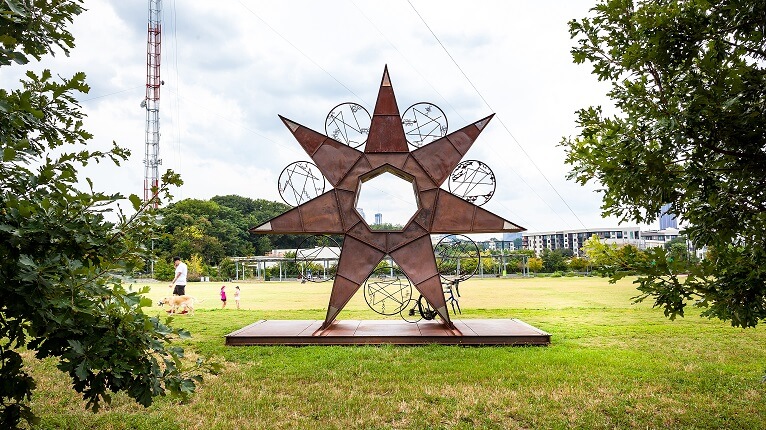 What was once a railway corridor full of iron is now a trail full of whimsy and exploration. The iron does, however, remain as artists have created iron and steel structures across the path that inspire curiosity and tell unique stories. Just take A 24/7 Timestar Lives that creates unique shadows across the landscape as the sun passes. Additional works include Railway Workers, the Iron Column and more metal masterpieces, all crafted from discarded railroad pieces of the BeltLine itself, connecting these unique pieces to the history behind them. 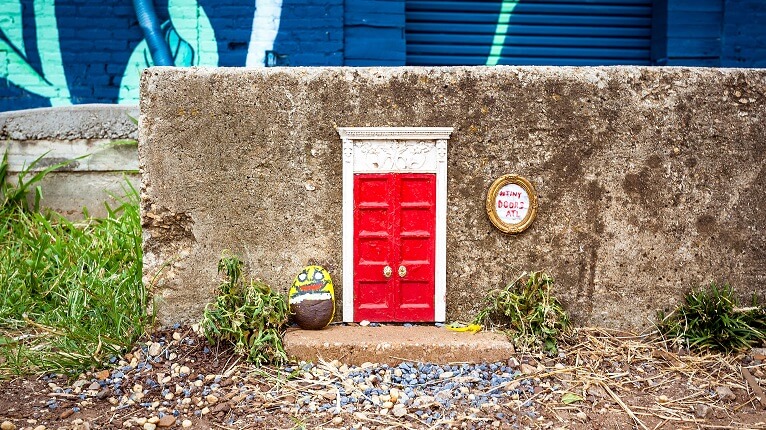 While the BeltLine’s Eastside Trail has so much to see at eye level, you’d be remiss if you didn’t take a second to look down. Depending on where you are, you just might find a doorway to something straight out of “Alice in Wonderland.” Discreet offerings like the Tiny Doors project of minuscule entryways are more challenging to find, but that’s all part of the fun in exploring the BeltLine. 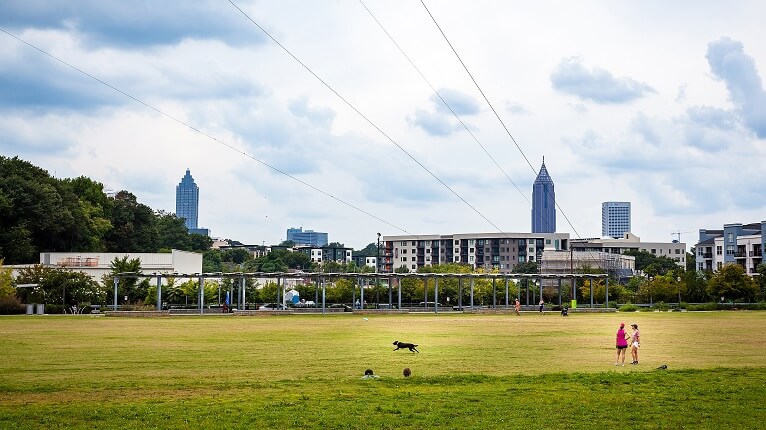 The first green space that comes to mind on the BeltLine is probably Piedmont Park, but you can also peruse just as lush an area in Old Fourth Ward. Historic Fourth Ward Park has glorious skyline views and space large enough to host a variety of events from concerts and festivals to outdoor yoga classes and recreational sports. If you want to practice your thrashing skills, O4W Skate Park is a sound decision to discover your inner Tony Hawk. Just try not to wipe out. And whether you’re on the BeltLine for exercise or leisure, if you don’t have a bike, Atlanta’s Relay Bike Share program provides easy access to two-wheeled transportation along the trail. 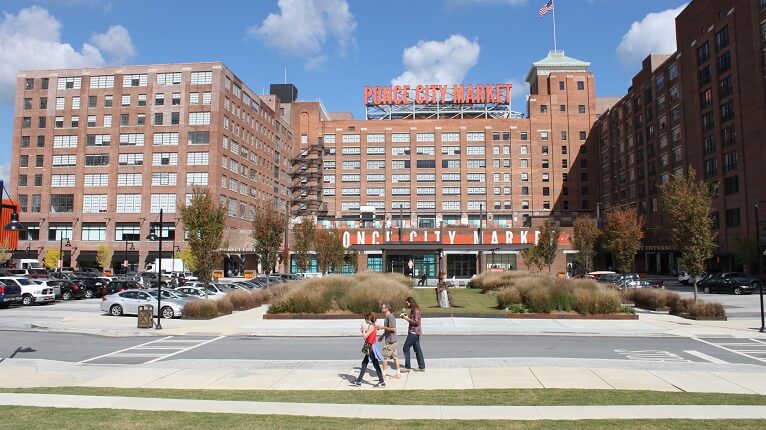 The last stop on this BeltLine tour of the Eastside Trail takes us to Atlanta’s mixed-use development, Ponce City Market. What’s not to love about the former Sears, Roebuck and Co. and Atlanta City Hall facility that now houses mouth-watering dining options, serious cocktail action, retail shops, living space and the cherry on top in Skyline Park’s rooftop digs for sprawling views of ATL and carnival games galore.

EatAtlanta is home to many celebrities as well as fabulous food. When you combine the two, you have delicious food with that Hollywood touch.

NewscredClink clink, ATLiens! Sip safely and throw your own personal happy hour with to-go drinks around the city.

AttractionsSummer's here and ATL's outdoor attractions are fun for the whole family.

Best Outdoor Attractions and Activities for Kids in Atlanta this Summer

EatEating out for Easter? Atlanta restaurants are ready for you.

Hop To It: Where To Get Your Easter Brunch On!

NewscredAtlanta has some of the best shopping malls in the Southeast and, frankly, even the country.

Sports and OutdoorsLocated just a scenic, two-hour drive from Atlanta, Tallulah Gorge is the deepest canyon east of the Mississippi.