While Southern cuisine reigns supreme in Atlanta, we can’t forget the fierce loyalty people have for barbecue – and it can get pretty contentious. But can you blame them? The flavor. The succulent meat. The billowing smoke. We’re not satisfied until our wings, ribs and chops reach fall-off-the-bone territory, so in honor of the finger-licking, food coma-inducing art form that is barbecue, we’ve asked around and rounded up eight of the best BBQ restaurants in Atlanta along with suggestions of what to order as you explore the city’s glorious barbecue scene. Did your favorite make the cut?

When it comes to barbecue goodness, it’s best to never judge a book by its cover. What may seem like a hole in the wall from the outside may be housing a delicious experience inside. Daddy D’z BBQ Joynt, which has been serving up slabs of juicy ribs for more than 20 years, is a prime example and has garnered a cult following and international acclaim from the likes of BBC, Food Network and Travel Channel.

What You Should Order: Daddy D’z ribs are a house specialty and bad to the bone, but don’t forget to try the Famous Que Wraps of BBQ pork wrapped in dough and fried golden brown.
Where: Downtown

Cracklin’ B’s Barbecue ATL suffered a fatal fire to its south Atlanta location, and fans of its award-winning barbecue celebrated when it opened again inside a Kroger in the Virginia-Highland/Old Fourth Ward neighborhood. The food is as delicious as ever and there is a pre-packaged to-go counter for those on the move. Don’t miss the brisket, Carolina hash and ribs, all of which are cooked over wood in special smokers. The owner, Bryan Furman, recently was named one of the Best New Chefs by Food & Wine.

What You Should Order: B’s dedication to producing its own Heritage breed of hogs shows in its aptly named, Carolina’s Finest Pork Sandwich.
Where: Virginia-Highland/Old Fourth Ward

Fox Bros. Bar-B-Q serves as the standard in ATL’s ‘cue scene and is typically the first place that comes to mind when locals recommend a must-try barbecue spot. This crowd favorite brings a little bit of Texas in its barbecue style with a focus on cooking slow and allowing the rich hickory smoke to permeate the meats, imbuing unadulterated flavor.

What You Should Order: Fox Bros. hickory-smoked wings will take a game day to the next level with brisket making for the perfect sandwich. Be sure to try The Tomminator, a bed of crispy tater tots drowned in savory Brunswick Stew and topped with melted cheese. Yum!
Where: Eastside, Candler Park 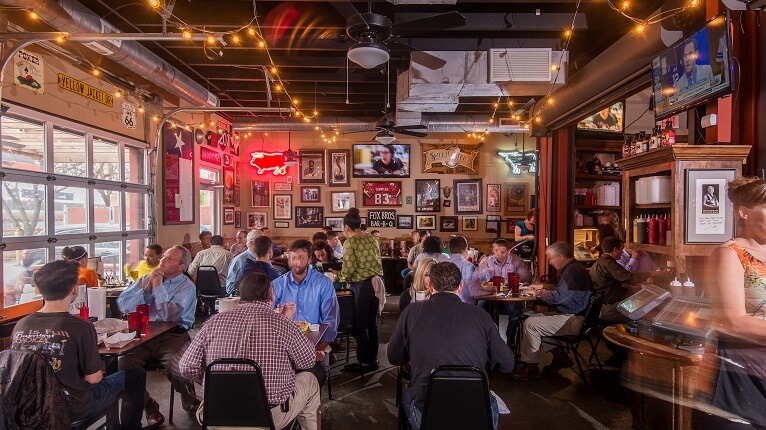 The neon lights are bright and the ribs are oh so right at Fat Matt’s Rib Shack in Morningside. An ATL icon through and through, Fat Matt’s has been kicking out the succulent and savory goodness for more than 20 years. With live blues playing nightly and funky vibes aplenty, the choice is never just one rib – more like one slab or two.

What You Should Order: It’s in the name. Fat Matt’s ribs are the true star of the show with a fall-off-the-bone pedigree and complemented by amazing sides like “rum” baked beans and coleslaw.
Where: Morningside, Midtown

Where our previous barbecue spots have been steeped in traditional styles, Sweet Auburn BBQ turns tradition on its head with its modern and eclectic approach. While you can still find classic slow-smoked meat marvels on the menu, Sweet Auburn’s penchant for Asian-style influence — using ingredients like sesame, pineapple and ginger  — makes the Asian selections true flavor standouts.

This downtown smokehouse, Twin Smokers BBQ, went out of its way to find the perfect style of barbecue to bring back to ATL. And while most spots on our list tend to focus on one particular style whether it be Texas, Carolina or Memphis, Twin Smokers decided to bring them all under one roof utilizing its namesake smokers to dole out barbecue doused in both mesquite and hickory. The slabs of meat that smoke for 12 hours on end are savory, moist and packed with flavor and will help you discover your inner caveman.

What You Should Order: It’s all about the brisket baby at Twin Smokers. Whether sliced up or between two pieces of bread, the beef cut has been highly lauded as one of the best in Atlanta.
Where: Downtown 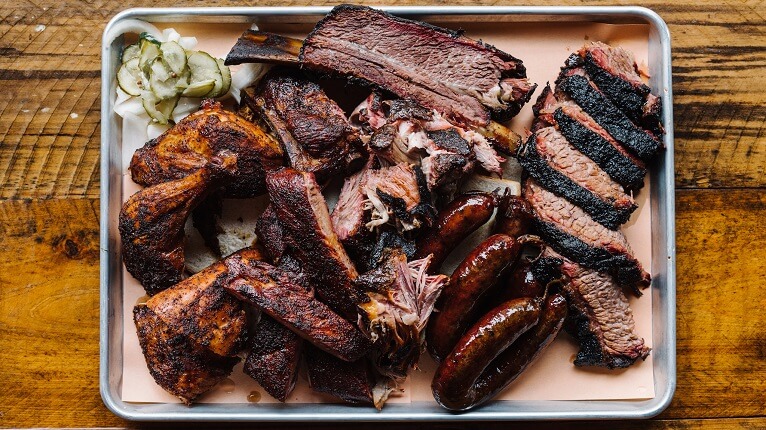 It may be small but it is mighty. Consistently on the list of best barbecue joints in the country — if the line extending well out the door and around the building of this tiny Cumberland-area barbecue house is any indication — Heirloom Market BBQ is serving up the meaty goods. What makes Heirloom’s unique brand of ‘cue special is the blend of influences going on in the kitchen — that perfect meld of American influence with Korean flavors and technique.

What You Should Order: The spicy Korean pork is a must-have experience in platter and sandwich form topped with kimchi slaw.
Where: Nearby, Cobb/Cumberland, near Smyrna and Vinings

A Day at Ponce City Market

Cool Things To Do in Atlanta in December

Things to Do Near Georgia State University

A Top Destination for Your Manufacturing Group

Where to Hear Trap, Rap and Hip-Hop Music in Atlanta